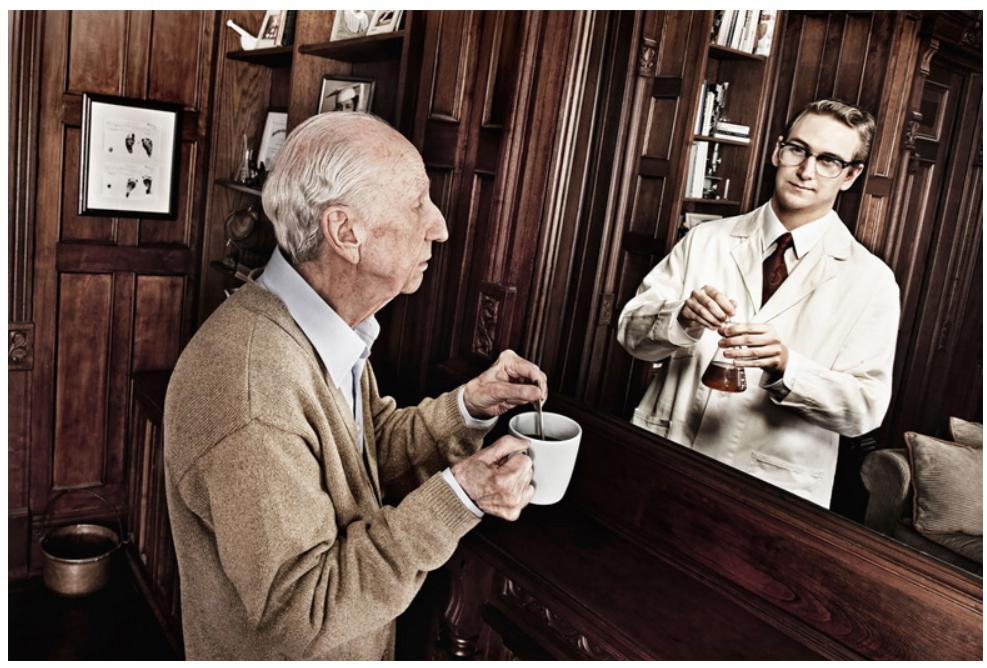 The picture above was taken from a photo series by Tom Hussey. The photos show an elderly person looking at the reflection of his / her younger self in the mirror. You can check them out by clicking below:

"Reflections of The Past"

Quotes On Age I'm Thinking About:

“The afternoon knows what the morning never suspected.”

"How old would you be if you didn't know how old you was?

Leroy Robert "Satchel" Paige was a professional baseball pitcher who played first in the Negro League and then in Major League Baseball. He played his first major league baseball game in 1942 at the age of 42. He played his last game in the major leagues at 59 years old.  In 1971, Paige became the first electee of the Negro League Committee to be inducted into the Baseball Hall of Fame in Cooperstown NY.

While I am not willing to declare a specific age like the author did, I heartily agree with the points of view in this article in The Atlantic by Ezekiel Emanuel, MD entitled, WHY I HOPE TO DIE AT 75. This article so perfectly captures my own personal philosophy. From the article, “It is true that compared with their counterparts 50 years ago, seniors today are less disabled and more mobile. But over recent decades, increases in longevity seem to have been accompanied by increases in disability—not decreases. For instance, using data from the National Health Interview Survey, Eileen Crimmins, a researcher at the University of Southern California, and a colleague assessed physical functioning in adults, analyzing whether people could walk a quarter of a mile; climb 10 stairs; stand or sit for two hours; and stand up, bend, or kneel without using special equipment. The results show that as people age, there is a progressive erosion of physical functioning. More important, Crimmins found that between 1998 and 2006, the loss of functional mobility in the elderly increased. In 1998, about 28 percent of American men 80 and older had a functional limitation; by 2006, that figure was nearly 42 percent. And for women the result was even worse: more than half of women 80 and older had a functional limitation. Crimmins’s conclusion: There was an “increase in the life expectancy with disease and a decrease in the years without disease. The same is true for functioning loss, an increase in expected years unable to function. This was confirmed by a recent worldwide assessment of “healthy life expectancy” conducted by the Harvard School of Public Health and the Institute for Health Metrics and Evaluation at the University of Washington. The researchers included not just physical but also mental disabilities such as depression and dementia. They found not a compression of morbidity but in fact an expansion—an “increase in the absolute number of years lost to disability as life expectancy rises.  As Crimmins puts it, over the past 50 years, health care hasn’t slowed the aging process so much as it has slowed the dying process.”

So, how do we age well? According to Roger Landry, MD, MPH, author of the book, Live Long, Die Short: A Guide to Authentic Health and Successful Aging, "A ten-year study by the MacArthur Foundation found that that 70 percent of physical aging, and about 50 percent of mental aging, is determined by lifestyle, the choices e make every day, not our genetics. That means that if we optimize our lifestyles, we can live longer and ''die shorter'' (compress the decline period into the very end of a fulfilling, active old age)."

I believe we are designed to live and die much like a candle, burning brightly until the brief flickering at the end. I have certainly known people who have exemplified the, "live longer and die shorter" but sadly they are currently the exception not the rule in our society.

HERE is a blog post, How to Have a Long Awesome Life: 5 Secrets From Research, that discusses some steps to take to take. There are some interesting links to explore in the blog post. Here is a summary from the blog author if you want the highlights: